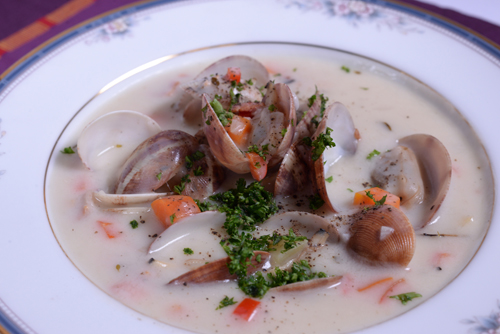 “Anything tastes better with bacon!” How true, I often add bacon to pastas and soups. TV Chef Sharwin Tee shares his Clam Chowder recipe during his cooking demonstration for The Maya Kitchen’s Culinary Elite Series. My family loves Clam Chowder and it is perfect for those cold rainy days. There are so many variants of Clam Chowder. I like thick soup. In the United States, “New England-style” clam chowder is often characterized as being thicker and more creamy, even though traditionally it is rather thin (with many late 19th and early 20th century recipes using condensed milk as the base). This Clam Chowder does not use a lot of milk and instead uses sour cream with the flour to thicken.

Chef Sharwin stars on “Curiosity Got the Chef” which is now on its 5th season on the Lifestyle Network. He shared culinary tips and tricks always pointing out that cooking should be a fun and interesting experience.

Directions:
1. In a pot, sauté garlic and clams in 2 tablespoons of olive oil for one minute. Pour in white wine and let clams steam until they open.
2. Remove meat from clams and save the liquid.
3. In a new pot, sauté the bacon in the remaining 2 tablespoons olive oil until fragrant but not crispy. Add in flour, herbs and cook until a paste is formed.
4. Pour in cooking liquid from clams and fish stock and stir well to break up any lumps.
5. Simmer for 30 minutes.
6. Add in the cubed vegetable and simmer until cooked. Season with salt and pepper.
7. Serve the soup with clam meat and sour cream as garnish. Top with chopped parsley as well.

For more information, log on to www.themayakitchen.com or e-mail [email protected]