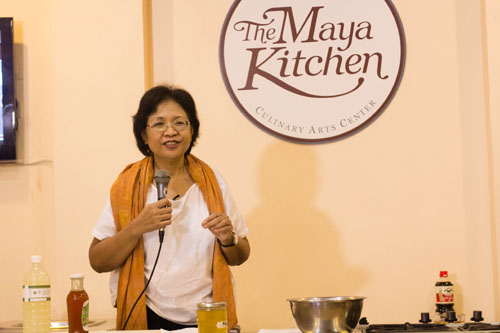 “My first introduction to the concept of a kulawo was in 2003, when I visited Ugu Bigyan’s home and pottery studio in Tiaong, Quezon. Visitors could call ahead and arrange to have lunch in one of his beautiful gazebos, where they would savor his signature dish, the banana-heart kulawo.

In Laguna, a neighboring province north of Quezon, it is the kulawong talong that stirs many nostalgic food memories among the locals. Both versions are tart because vinegar, instead of water, is used to extract the milk from freshly grated coconut singed with a hot coal. Interestingly, if one travels further south, the Bicolanos’ burnt coconut cream is not vinegary at all, since water is used as the prime medium of extraction.

The use of burnt coconut cream has been one of my most treasured discoveries in Philippine cooking, and I have never stopped wondering why I never encountered this while growing up in Manila, which is just a two-hour drive from Laguna and Quezon.

We would like to thank Nicholetta Labellachitarra, a Filipino chef working in Boston, who shared her memory of this dish —grilled eggplant with burnt coconut cream—with Romy, inspiring him to create a version of his own.”

1. Preheat the oven to 400° F. Defrost the coconut and mix with the coconut sap or rice vinegar, kneading to extract as much cream from the coconut as possible. Wrap the coconut-vinegar mixture in cheesecloth and squeeze the coconut milk into a bowl until all the milk has been extracted (this should yield approximately 21/2 cups of liquid). Set the extracted coconut milk aside.

2. Spread the squeezed, grated coconut evenly on a baking sheet and bake, stirring every 15 minutes, until it is dark brown, about 50 minutes. Turn on the broiler, and place the baking sheet under it for another 5 to 10 minutes to slightly char the coconut—but be careful not to burn it too much.

3. In a saucepan, combine the extracted coconut milk, half of the pan of burnt coconut, the canned coconut milk, garlic, ginger, shallots, and chiles, if using. Bring to a boil, then lower the heat and allow the mixture to simmer for 10 minutes. Strain through a very fine-mesh sieve, using the back of a big spoon to squeeze out as much liquid as you can. Return the liquid to the saucepan and keep warm while grilling the eggplant.

4. Place the eggplants on a stovetop grill or under a broiler and cook until the skin is charred and the interior is soft. When just cool enough to handle, peel the eggplants and use a fork to spread and flatten the flesh a little. Season to taste with sea salt.

5. Arrange the eggplants on a dish and pour the warm burnt coconut cream over them.